Warning: call_user_func_array() expects parameter 1 to be a valid callback, class 'GMW' does not have a method 'plugins_loaded' in /home/customer/www/armitage.ws/public_html/wp-includes/class-wp-hook.php on line 307

Warning: call_user_func_array() expects parameter 1 to be a valid callback, class 'GMW' does not have a method 'widgets_init' in /home/customer/www/armitage.ws/public_html/wp-includes/class-wp-hook.php on line 307

Warning: call_user_func_array() expects parameter 1 to be a valid callback, class 'GMW' does not have a method 'init' in /home/customer/www/armitage.ws/public_html/wp-includes/class-wp-hook.php on line 307
 Orphaned elephants in Nairobi - Steve Armitage travel blog 
Warning: Use of undefined constant user_level - assumed 'user_level' (this will throw an Error in a future version of PHP) in /home/customer/www/armitage.ws/public_html/wp-content/plugins/ultimate-google-analytics/ultimate_ga.php on line 524

The David Sheldrick Elephant Trust nursery nestles in a corner?of the Nairobi National Park, on the south west edge of Nairobi, Kenya. The nursery?looks after?orphan elephants from birth to 3 years old before they are sent to a rehabilitation centre in?Tsavo National Park for acclimatisation. At Tsavo, they are slowly integrated into an existing heards, where they will spend the rest of their days. 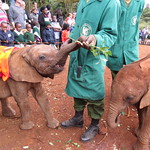 There are currently 25 elephants in the nursery?ranging from 3 months to 3 years. The elephants are kept in 2 groups: 0 to 2?years and 2 to 3 years, as the older adolescent elephants tent to get quite boisterous when they play.

The orphaned?elephants are brought to the centre when their mother is no longer able to look after them or they are found abandoned. A majority of the cases are due to human intervention, such as the mother being killed?and being abandoned after?getting stuck in wells or drainage ditches.

The elephants are looked after by the keepers 24/7, staying in stockades (stables)?that includes a cot for the keepers. The keepers are rotated around the elephants to stop strong attachments forming and prevent the a strong?bond forming and the associated mourning when the keeper is not present. 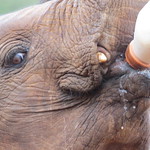 Each day between?11am and midday, the elephants are brought out in their groups to be fed and play in front of an audience of paying customers (500 Kenyan Shillings/?4.20). Standing around a roped off play area, you watch the elephants hurry?down the hill in anticipation of their lunchtime milk. For the young elephants, they are fed through a blanket to mimic the feel of feeding from their mother.?Once their milk bottles have been emptied, the older elephants get to bathe?in the dirt and play with each other while the infants (<1 year) in their massai blankets are slowly lead around the edge of the ring so that people can touch them and talk to the keepers. 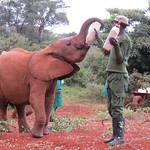 After 30 minutes, the first group of young elephants are led away and ?the second group of older elephants scurry down the hill for feeding. Some of the?these elephants try to hold their milk bottles with the end of their trunk, but i did not see any hold them successfully. 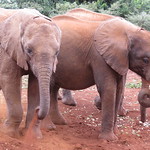 The?juvenile?elephants can be quite rough when they play, mock-charging or barging each other out of the way. The keepers keep a good oversight to stop things getting out of control, but with a piece of string between you and the elephants, you need to be prepared to step back when the action gets close.

2 thoughts on “Orphaned elephants in Nairobi”