I had my accident in a small village, 15km east of Mazabuka while traveling along the T1 in Zambia. The accident happened on the 7th July, which is Hero’s Day in Zambia, a public holiday. 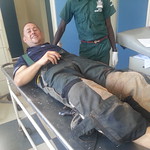 From?the accident scene, Natalie took me in his own car to Mazabuka District Hospital. This regional hospital has an emergency room, but it is a very basic facility with an X-ray facility, surgery and a single doctor on call that day. I was transported on a bare metal gurney from Natalie’s car to the triage room, where they looked at my foot and admit me to the general hospital ward. Each bump along?the concrete path was?directly transmitted to my ankle and caused me to wince. The gurney drivers are not expert and my ankle gets banged against doors and walls as i project beyond the narrow tray. 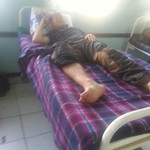 I’m admitted to the general ward which looks like the hospital photos i’ve seen from the second world war or a Carry-On film. Beyond the nurses desk, the white framed metal sprung beds are arranged either side of an isle, some with handcuffs attached. The beds are not on casters, so are dragged around if space is required, the associated vibrations making quite a din. The space between the beds is not large enough to turn a stretcher into, so the beds are frequently dragged around.?Windows are left wide open “as it’s good for you”, though as it gets dark, mosquitos arrive looking for supper. 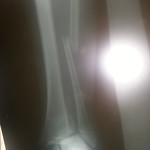 Around 1pm, a doctor and nurse approach me and review the x-ray. I have fractured?my?fibula, fractured?the distal part (bottom) of the tibia and dislocated and the lateral malleolus – where the tibula and fibula meet at the ankle. They tell me they will operate tomorrow. They only have panadol pain relief. If i wanted?the recommended injected painkiller, i’ll need to buy it from the local pharmacy. Kindly, the father of the guy who walked out in front of me offers to go and by the pain relief for me. The injection helped, but i was not comfortable all afternoon, just laying on the bed without any additional support for my leg/ankle.

Around 5pm, my medical insurance company recommended?that i should move to a hospital in Lusaka which has better facilities. To proceed, they needed me to sign a document which says if the insurance proves to be invalid, i’m responsible for the costs they will incur. However, getting a document to me that i could sign and return proved impossible. At 9pm i received my partially recharged phone and was able to reply to the email which confirmed agreement and along with a follow-on phone call where i said the same thing, they were able to instruct the ambulance to come out and fetch me. 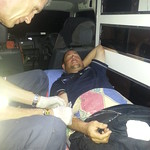 The ambulance?arrived from Lusaka at 11:30pm and prepared me to be moved. Peter, the paramedic needed to sign a waver that i was being released against doctors orders. I was stretchered out to the Toyota Landcruiser ambulance and put into the back. It was quite cramped in the back, but Peter was able to fit a splint to stabilise my leg and also a drip so that i could be given some pain killers during?the journey to Lusaka. My initial pain reading was 7/8 out of 10, quite bad. He gave me some morphine which as well as making me feel quite tingly, reduced the pain to 5/10. The main roads in Zambia are mostly ok, though there are plenty of potholes and a generous quantity of road humps. The small roads getting to the main one and to the hospital were pretty bumpy and the section of roadworks did not help. With my second 5ml serving of morphine, i was down to a 3/4 out of 10 on the pain scale.

I arrived at Fairview Hospital in Lusaka at 1:30am on the 8th July, where i was promptly taken to have more x-rays, as the?Mazabuka Hospital would not release the x-rays they’d taken earlier. They then applied a slab-cast – a plaster cast, where front is not solid to allow for movement and swelling. I got to a twin room at 2:30am and tried to sleep.

The daily ritual of the hospital starts at 5:30 with a vital sign check: Automated?blood pressure check; Blood oxygen% & Heart rate taken with an on-finger clamp; Body temperature with a digital thermometer in the arm-pit. If your entitled to drugs, you get them after the vital signs check. At 7am, breakfast is served – a choice of bread, butter and jam or porridge, serviced with tea or coffee. 9am, the doctor does his ward rounds. 10am is another vital signs check. 1pm is lunchtime with a 5-option menu that rotates through a weekly pattern. 2pm is vital signs check and more drugs if applicable. 6pm is a vital signs check. 7pm is supper. 10pm is the last vital sign check and last set of drugs for the day.

Not being sure if i was going to be operated on, i did not have breakfast. At 9am, the doctor said that i?would be operated on at midday the following day?at?the Italian Orthopaedic Hospital where he had his surgery . I hung out until lunch time for food, which was a nice beef stew and rice. Having not moved from the bed, i asked the nurses about how i could have a pee. They jumped at a catheter, but i was keener to get a piss-pot.?It took a lot of false starts, concentration and effort to undo years of training not to wet the bed to be able to use the device successfully. Between vital sign checks, i was left alone by the staff.

After the first set of vital sign checks and drugs, I was offered a bed bath as the nurse assistant noticed that i didn’t have anyone else to help me. Quite an odd experience for me, feeling so helpless. I changed into a hospital gown in preparation for the operation. Skipping breakfast again, i was collected at 9am and taken to the Italian Hospital. The Italian Hospital is linked to the Catholic church and includes some nun’s who provide a pharmacy and admin service to the hospital. The hospital was mid-way between the nice Fairview and the very basic?Mazabuka hospital. Cleaned regularly, it had the feeling of a 60s/70s Pontins camp.

I receive?a call from Karen van Boxtel who works at the British High Commission in Lusaka. Mum had been in contact with her by email and she called asking how she could help. As well as giving her the information on my insurance, she also had some contacts who may be able to look after my motorcycle while i’m getting myself fixed up.

I start talking to Jane who works on reception and talk about my plight of not having any clothes at the Italian Hospital. She generously offers to buy me some shorts and a t-shirt, which would allow me to get into clean clothes. Jane returns at 6 with a pair of boxers, long AC Milan branded shorts, vest top, t-shirt, Argentina branded tracksuit top and jumper. She helps me change and we chat for a few hours. It’s nice to have company and talk about things other than my leg/ankle and medication.

At 11pm, i get a call from the insurance company with a nurse who want to question me and find out about my mobility and how well i’d be able to cope on a flight. For the last couple of days, i had been able to visit the bathroom using a stroller/zimmer frame and hopping behind it. After discussing my mobility, continence and level of pain, i was promised a call in the morning to get the nurses verdict.

I get a call from the medical insurance with the conclusion that they think it’s OK for me to travel. Jane brings me breakfast of a 3 layer sandwich with eggs, meat and cucumber, some sausages and honey and ginger tea. I can only eat 2/3 of the sandwich as it’s very filling. The doctor provides a fitness to travel certificate which i will need to show at the airport.

At lunch time i head to reception to meet up with Jane and we go out into the sunshine for lunch. Natalie who took me to hospital from the crash site?visits me and brings some of my personal things from the motorcycle. Karen also visits and we discuss the way forward with the motorcycle. She also advises me that the police are going to prosecute me for ?careless driving and i have to pay a 300 Qwatcha ( ?30) fine. I don’t protest, it seems easier to get my motorcycle released and i can not have to worry about any future prosecution.

In the evening, after some more faffing, i’m transferred back to Fairview which is much more comfortable and has a full suite of drugs. The kitchen is closed, but i am able to get a chicken pie from the cafe for dinner.

The nurse offers me another bed bath and i suggest i’ll try to take a proper shower by hanging my leg out of the bath. it proves to be remarkably effective. I send my clothes to the laundry as i’ve worn my 2 sets of underwear and t-shirts for a couple of days – this means another day spent in a theatre smock. I become conscious about the male Scottish problem of giving people a glimpse of the jewels. I get away with my dignity intact.?It takes the whole day for the flights to be finalised. I need to get hold of some crutches, as Emirates won’t confirm the flight until i’m able to move around on the aeroplane. Fairview only has a single crutch, so i ask Jane to bring some over for me from the Italian Hospital.

At 11pm, i get confirmation of the flights booked with times, etc. The insurance company are finalising the transfers to and from the airport.

I get final confirmation about the flights and transfers and picked up from Fairview Hospital at 6pm.