Warning: call_user_func_array() expects parameter 1 to be a valid callback, class 'GMW' does not have a method 'plugins_loaded' in /home/customer/www/armitage.ws/public_html/wp-includes/class-wp-hook.php on line 307

Warning: call_user_func_array() expects parameter 1 to be a valid callback, class 'GMW' does not have a method 'widgets_init' in /home/customer/www/armitage.ws/public_html/wp-includes/class-wp-hook.php on line 307

Warning: call_user_func_array() expects parameter 1 to be a valid callback, class 'GMW' does not have a method 'init' in /home/customer/www/armitage.ws/public_html/wp-includes/class-wp-hook.php on line 307
 Uganda: Queen Elizabeth National Park - Steve Armitage travel blog 
Warning: Use of undefined constant user_level - assumed 'user_level' (this will throw an Error in a future version of PHP) in /home/customer/www/armitage.ws/public_html/wp-content/plugins/ultimate-google-analytics/ultimate_ga.php on line 524 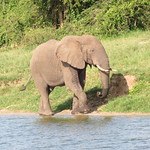 I got quite excited, though possibly in my own ignorance not thinking through the full implication of what i was going to do. In Uganda, you are allowed to visit the national parks with a motorcycle. Yes, i can ride my motorcycle along paths without any barrier between myself and elephants, hippos, crocodiles, buffalo and tree-climbing lions. Excitement and the opportunity to ride in a park outweighed caution and off i went to visit Queen Elizabeth National Park. 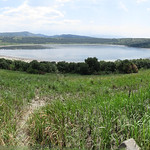 The Uganda Wildlife Authority have just introduced a smart-card system across their parks, where you buy credit for the activities at the gate and then hand over the card in exchange for?a ticket at the activity office. Topping up my card with enough credit for entry, a boat ride and camping, i headed along the road and into the entry gate. Along the public road, you come across some of the large volcanic craters which litter the area and now make lakes and watering holes. Some antelope kept a weary eye on me as i passed, poised to run if i turned into a predator. 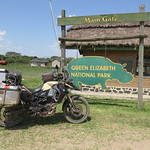 Entering the park, i was pretty excited, not knowing what i was going to come across. Travelling along at 30km/h still seemed fast along a rutted sandy track while also looking for animals either side of the path, though the bike was twitchy travelling any slower. The scenery?flanking the trail varied from 8ft tall grass to scrub, so lots of places for small and large animals to hide out of sight. I came across some warthogs which scattered quickly into the bush. 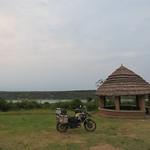 Finding Campsite III, it looked like an unloved area with open showers and long drop toilets and not much flat ground. In one corner was a roundel with a thatched roof and a concrete base that looked like it’d make an idea shelter.

Heading to the jetty, i waited with a group of trainees until the captain arrived. They suggested that i sit on the port side of the boat, as this was the side that would be closest to the shoreline. Unfortunately, 2 minibuses of tourists appeared and caused the boat to list as they took all of the left hand side seats. ?Every seat had a buoyancy aid on it, which all of the tourists put on. Heading out into the stream, we were asked if we went to the top deck to not all stand on one side – i was filled with confidence. 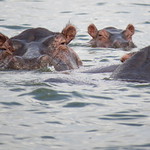 As soon as we crossed the Kazinga?Channel, we came across a lot of hippos basking in the shallows. Along?the shoreline and sharing the?shallows with the hippos were buffalo, both animals coexisting happily. Near by and just about tolerated?were young?nile crocodiles, about 1.5m long, basking in the sun with their mouthes open in a crocodile smile. Away 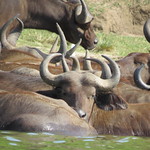 from the main buffalo heard were ones and twos of buffalo which the guide referred to as “losers”. They were the old and sick, and in the words of the guide were waiting to either die of natural causes or be eaten by the larger nile crocodiles. 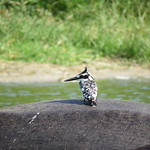 In the bushes, on fallen tree stumps and on the back of animals along the channel were many kingfishers. Along the shoreline were nile ducks, walking along the bank, keeping their distance from the crocs. In the tallest tree were a pair of sea eagles, making their distinctive call and keeping an eye open for 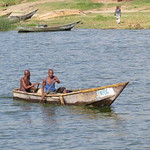 any dining opportunities. We came across a village with people on the shoreline, only meters away from hippos in shallow water. The villagers need to head into Lake Edward to fish, the channel is a protected area and the policy helps reduce conflict between the fishermen and the hippos. Beyond the village,?the shoreline was covered in wildfowl of all varieties, including puffins, stalks, herons and ducks. 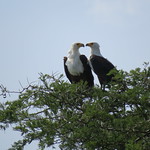 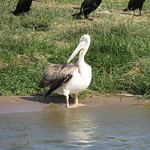 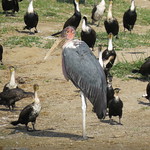 Back at the campsite, i put up the mosquito-net-tent, which provides protection only from mosquitos and nothing else. Having enjoyed a fish supper at the Tembo restaurant, i returned to the campsite in the dark. Shortly after i get into my sleeping bag, i start to a hear chomping sound that sounded like a guillotine cutting firm plastic. After 10 minutes of listening to the grazing, i get up, put my trousers back on and turn on my head-torch. Slowly panning around the outside of the roundel, about 10 meters away i spot 3 hippos, 2 of which were very small scampering off into the scrub. There are no other sounds, though i’m too excited to fall back to sleep straight away. Around midnight i’m woken up again by hippo grazing sounds. This time i can see the shadow of the hippo by the entrance to the roundel. I stay very still and watch as it slowly moves around and out of sight. I find that all of my equipment makes a?loud sound every time i move, from my synthetic sleeping bag to my inflatable mattress. I wake up just before 6 to another hippo grazing my the roundel. It’s still not light and i’m getting annoyed that i’ve been unable to take any photos of the hippos overnight. I try to get out as quietly as possible (i.e. not very) and by the time i’m ready with my torch and camera, the hippo has disappeared.